Part 1 = A quickie about file types, raster vs. vector

A client had a vector map of all electricity transmission lines in a city, placed on a PowerPoint slide. A very complex map, although in number of Kb, it was acceptable. Only problem was that it actually took PowerPoint about 30 seconds to read and then display the map. That’s one looong transition between slides. The audience tapping their fingers, waiting.  Totally unacceptable.

Another time, I was attending a 90th birthday celebration. A whole slew of beautiful photos, unfortunately they were not properly formatted, down to screen resolution. It took the presenter about 20 minutes to actually load the show in memory before the first slide popped up. Thumbs twiddling telling jokes uncomfortable. Also, totally unacceptable.

There is an incredible array of files that PowerPoint can import for use on its slides. But not all are efficient at displaying themselves. This discussion will try to help you make that decision. Which file type to use and what resolution, depending on your ultimate purpose.

Ever had a look at a TV screen up close? Well, a computer monitor is the same. The macro photo below illustrates this quite well.

If you zoom into that macro photo of the computer screen, you can see the mix of red, green and blue pixels – which is where we get the acronym RGB.

Now the same type of macro photo for a print publication has a similar construction but a much higher resolution, anywhere from 150 dots per inch to 1200 dpi, depending on the printer’s capabilities.

In the case of print publications the colours are arrived at by varying the proportions of 4 colours: cyan, magenta, yellow and black – which is where we get the acronym CMYK. 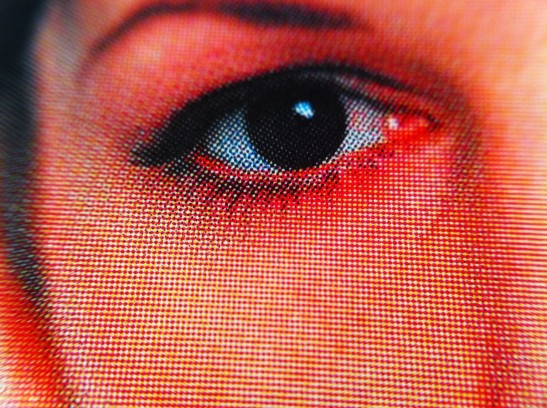 A print publication showing dots of ink in either cyan, magenta, yellow and black — CMYK!

Both of these types of images are built with either dots of ink or pixels of colours.

Another example, the photo below and its zoomed-in portion below that. 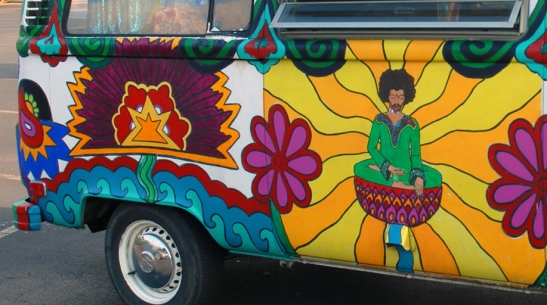 A photo is built up of rows upon rows of pixels.

To recap, a photo is built up of pixels (it used to be film emulsion grain) and can be used either for print or projection.

If you zoom into the photo, you can see the pixels. 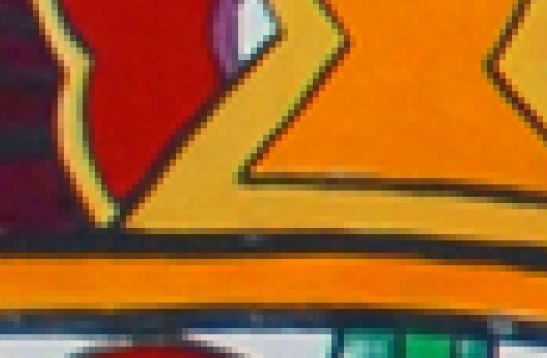 Zoom-in to see the actual pixels in a photo

The images below are constructed using totally different systems. The computer has a mathematical definition of a curve and its fill. Just a few lines of code. No pixels. The advantage here is that the file can be scaled to any size. Either a postage stamp or a highway billboard. Good quality for both images. But by their construction, they tend to work better for logos, and somewhat flat illustrations, like the one below.

You can see the actual curves that build-up the image

If you zoom-in, none of the detail is lost in a vector file.

None of the detail is lost, when you zoom into a vector file

Picture files that PowerPoint can import:

Types of picture files that PowerPoint can handle

To recap, if you plan to import a photo, JPG is the best for controlling your file size, quality of compression. If you bring in a logo, you have options with either EMF or even a transparent PNG file.

Ah, yes, the engineer down the hall has placed a photo onto a slide without formatting it beforehand. This has boosted the size of the presentation by 5 Mb. Yikes! No worries. PowerPoint has a built-in engine to reduce the number of dpi in your pictures, to either 200 or 96. Which is good. When you’re in a bind and need quick reduction of file size. The only problem with this is that you have no control over the quality of your images, you might be quite disappointed after the operation.  Other issue I have with this engine, is that if you have the box checked, it will optimize your photos each time you save the file. You might end up with really grossly artifacted photos or images. Like those PowerPoint shows circulating the net, nice but icky photos to music.

One option is to control the images individually. Especially if you know which is the guilty file that boosts your PPTX file size to unmanageable dimensions. If you double click your image, the Format tab gets activated. Under the Adjust section, click on Compress Pictures.

Format your photos to 96 ppi before importing them into PowerPoint.

The following list of sizes will give you an idea of what size to make your photos, depending how large you want them to show up on screen. Your full slide, a half slide, a quarter of your slide, or just a thumbnail.

1280×720 ppi is the minimum dimension for full screen photos
1365×768 ppi acceptable resolution
1280×960 ppi if you plan to both project and print your series of slides, keeping in mind that your standard widescreen displays are that size or larger.

From these above dimensions, you can extrapolate the size of your photos or illustrations, if they are raster-based, to the optimum size.

More, next time, about formatting your pictures for PowerPoint.

One comment on “Image Resolution Part 1: vector vs. raster”

Click on the Champagne Design logo to return to the main page, you will see a better VISUAL list of all posts. Or search for a topic.